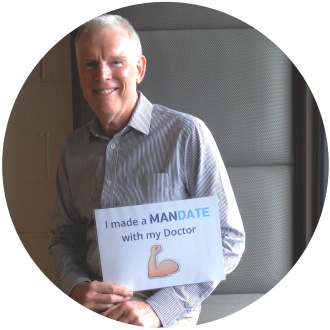 Ian Tanner is no stranger to cancer having lost his dad to bowel cancer, and also a brother in law and sister to law to cancer.

However, when Ian was diagnosed with prostate cancer in 2015 at the age of 61 it came as a bit of a shock as he had been leading a very fit and active lifestyle.

"I decided to go to the doctor and have a check-up after our financial planner suggested I should cancel a life insurance policy. I agreed but first decided to go and get a full round of medical checks to make sure everything was ok.

"I was and I wasn't surprised given our family history but the doctors found the cancer early and thankfully it hadn't spread. Looking back now I believe there were symptoms before my diagnosis, but as most men do we chose to ignore them."

Ian remained positive and was fortunate to be approved for a prostate cancer trial funded by the PA Research Foundation and conducted at the PA Hospital.

Doctors at the PA recruited prostate cancer patients to take part in the Prometheus Trial to trial a new, non-invasive way to treat prostate cancer which negates the need for surgery, but also delivers a quicker and more target radiation therapy.

Radiation oncologist David Pryor says "This means treatment will become shorter and will have a higher chance of getting rid of the cancer.

"We are using a technique called 'stereotactic radiotherapy' which is an ultra-precise means of radiation therapy.

It involves using special technology that delivers radiation to a very, very tight volume and it also uses technology that monitors the [prostate] so if there were any movement, the treatment can be paused."

"When the opportunity arose to be a part of the clinical trial I discussed it with my wife and family and decided this was the better option for me considering my age and the minimal impact it would have on my health, time off work and it also had less side effects," says Ian.

"Radiation therapy started in February 2016. For seven weeks I underwent treatment every weekday evening for an hour. It was painless, and side effects were tolerable – better than expected because of the clinical trial as I had less treatment sessions, and less risk of burning nearby tissue.

"The ironic part is this prostate cancer diagnosis has contributed in a positive way to my long-term health benefits, because I made a few health changes.

"Some people I have spoken to believe that the cure for PC can be worse than the treatment which is not the case. I know some of the testing for PC isn't pleasant but it's better than the alternative.

"I couldn't have asked to be in better hands than with the team at the PA. I wouldn't have had that opportunity elsewhere and I will be forever grateful to them.

"The key to survival is early detection as the treatments available today have come a long way thanks to medical research, which means it's not necessarily a death sentence, you can survive and thrive.

"My future looks very positive, the threat has been lifted and lifestyle changes have been made so I feel like a brand new and improved model. There's nothing like this kind of event to help everyone focus on what's important."

Drawing on his experience to support others, Ian strongly believes in encouraging men to have regular check-ups, particularly if prostate issues run in the family.

Ian will continue to have regular check-ups for a while to track how his is going but his medical report has been given the tick of approval with A's all the way for successful treatment and survival thanks to medical research at the PA Hospital funded by the PA Research Foundation.