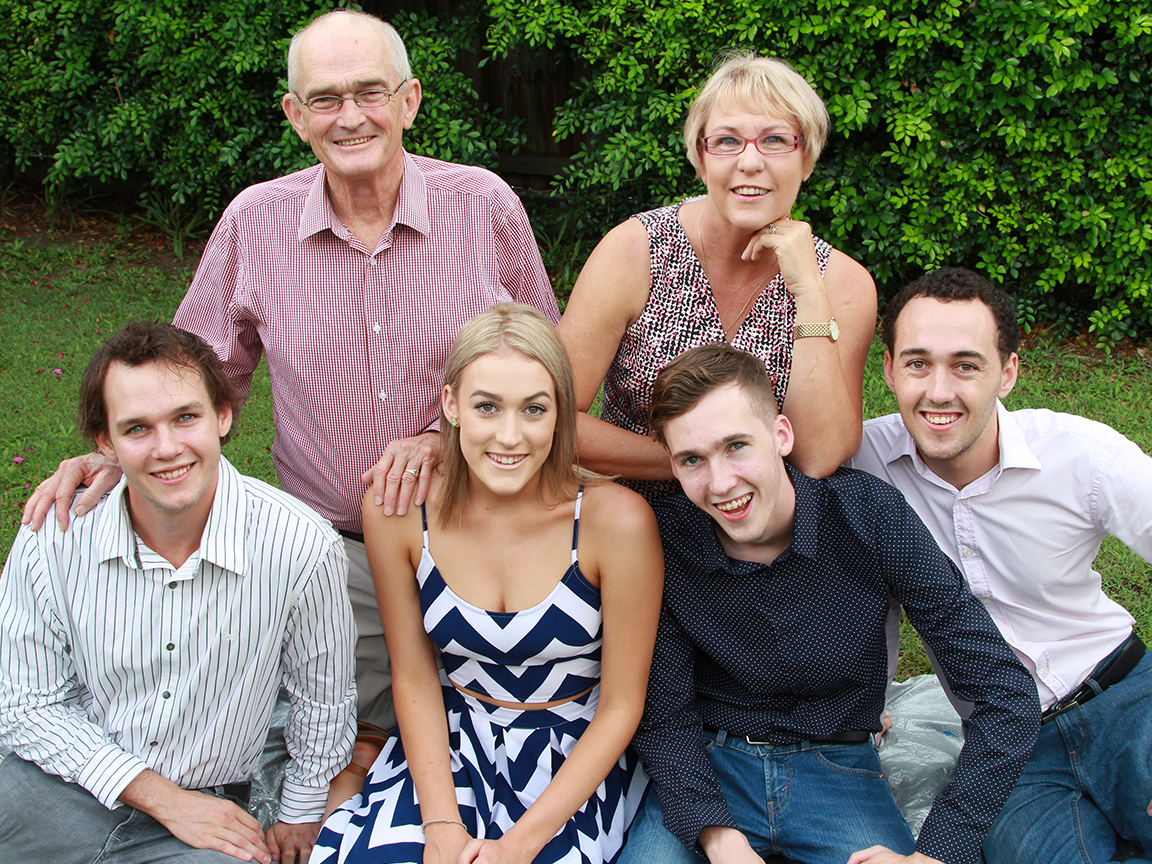 Kevin alongside his wife and four children

For many men, prostate cancer strikes out of the blue without warning, but Kevin's story is different. Kevin is one of the lucky ones, whose story serves as a cautionary tale; armed with the knowledge of his brothers' prostate cancer diagnoses that helped him make informed decisions and take necessary steps to beat the disease when he was diagnosed with prostate cancer years later.

Kevin had been receiving regular blood tests to monitor his Prostate Specific Antigen (PSA), under his doctor's advice, after two of his brothers had previously been diagnosed with prostate cancer; increasing Kevin's familial likelihood of developing the disease. At age 63, a blood test revealed his PSA was rising, but Kevin was not experiencing any symptoms and was physically fit and active prior to his diagnosis.

The rise in Kevin's PSA prompted his doctors to take a biopsy of tissue from Kevin's prostate, which revealed a low Gleason Score (the grading system used to determine the aggressiveness of prostate cancer). This indicated that the cancer was not overly aggressive, and Kevin could avoid a radical prostatectomy, opting instead to continue to have his PSA monitored.

Kevin remained symptom free, but regular blood tests indicated his PSA was continuing to rise. This led Kevin's doctors to suggest another biopsy, which indicated there was still no need for concern, and Kevin continued to be monitored by his oncologist.

Rather than undergo a third biopsy, Kevin's oncologist informed him that there was another option available if he was open to it – participating in a new research trial at the PA Hospital's Translational Research Institute. The research team were using an advanced type of medical imaging, which enabled the doctors to gain a more complete and clearer picture of the prostate and the affected areas and Kevin jumped at the opportunity to participate.

The imaging pinpointed the exact region the cancer was affecting, allowing the doctors to take a biopsy from this precise area. This technology and type of medical imaging made a tremendous difference in diagnosing and treating his cancer. Kevin met with his doctor to discuss the results and the next course of action as the test had identified the affected area.

The third and final biopsy, (post-scan) revealed that there was an area of the prostate which was more dangerous, leading Kevin to make the decision to have a prostatectomy. Kevin was able to receive keyhole surgery for this procedure, another marvel of modern technology and medical research, which significantly sped up his recovery time.

Since his surgery in September 2018, Kevin has regular, 6-monthly check-ups to monitor his health, including as recently as May 2020, attending with his wife to get feedback from his specialist on his most recent biopsy.

Kevin said his wife played a critical role in his journey. She was by his side for appointments, talked openly with Kevin about his options and has remained supportive and positive throughout the process.

"Men can be their own worst enemy when it comes to their health, because they will underplay something and say, 'I'm okay' or 'don't worry about it'. That's why it's good to go with your partner," Kevin says.

Throughout his journey, he was totally transparent with his wife and kids about what was happening. Kevin tells his sons he "may have given them a gift" and being aware of the signs and symptoms is critical.

Kevin's family history played a key role in the early detection, diagnosis and treatment of prostate cancer. As one of seven children, four of whom are men; Kevin's family already had a brush with prostate cancer. One of Kevin's brothers had been diagnosed 15 years earlier, in his 50's. His treatment consisted of a prostatectomy and radiation. Another one of Kevin's other brothers was also diagnosed with prostate cancer after his PSA (which was being closely monitored) continued to rise. The openness between the brothers helped Kevin to make informed decisions about his health and ensure he was as proactive as possible, both before he was diagnosed and while managing his treatment. The willingness to share experiences between the brothers also helped to break the stigma that often surrounds men talking openly about their health.

Men with a brother who has had prostate cancer have double the risk of being diagnosed as the general population and as a father to four children, three of whom are boys, Kevin says it is paramount to him to be open about his health and experiences.

Kevin is adamant that men take as much control of their own health as possible.

"It's only fair to our kids and partners for us to take ownership of our health. Being proactive in your own health, and getting an early diagnosis, means you can take care of yourself. I think it's important not to be totally dependent on doctors, but to make your own informed decisions," he says.

Kevin's story serves as a powerful reminder of the importance of increasing communication between men about the health issues they face, especially prostate cancer, a key goal of the MANDATE campaign. Kevin's brothers' openness about their experiences helped Kevin remain hypervigilant and aware of the symptoms, as well helping him proactively navigate his own cancer diagnosis.

To support our efforts to fund prostate cancer research aimed at helping men like Kevin you can donate online here.